“While Etienne lingered by the fire warming his poor raw hands, Le Voreux began to emerge as from a dream. He could now pick out each part of the works: the tarpaulin-covered screening shed, the headgear, the huge winding-house, the square tower of the drainage pump. With its squat brick buildings huddled in a valley, and the chimney sticking up like a menacing horn, the pit was evil-looking, a voracious beast crouching ready to devour the world.”

It’s taken me a month to read Germinal, not because it is overly long or difficult or boring or any of those things. No, I have been rather distracted, occupied, work has been difficult and I have been studying for an exam and it has all combined into a kind of depressive fug amongst which confronting this harsh, but exceptional, book has been something I could only take in small doses. But oh! it is exceptional, dense and beautifully written and stirring and awful. A reminder of what literature can achieve. I have spent the last month with a sick feeling in the pit of my stomach, just as the pit itself is sickening, swallowing families whole and giving them back nothing but black lungs and a hunger which cannot be sated. 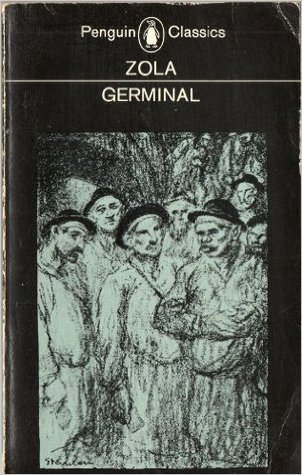 Germinal tells the story of Etienne, a worker who is expelled from his engineering job on the railways due to an angry outburst who finds himself wandering, starving, looking for work. His wanderings take him to Le Voreux, the menacing pit described above, and through a happy (or not) accident he is able to secure himself a job as a haulier – someone who pushes the container of coal to be lifted out of the pit. This is usually a job for girls (surprise! women also worked down the pits) but a policy change means that Etienne is given the role. Here he meets Maheu, a man whose family have worked in the pit for generations, his own father working his last days before receiving his meagre pension, who befriends Etienne and eventually takes him in as a lodger. Maheu’s own family work in the pit: his daughter Catherine, who Etienne desires, his son Zacharie, his other son Jeanlin. At home Maheu has a wife Maheude, a disabled daughter Alzire, twins Lenore and Henri and a baby Estelle. His  father, Bonnemort, also lives with them. With so many mouths to feed, the pittance the family bring home leave them in perpetual debt, barely scraping by.

The poverty of their lives, the destitution and the difficulties of their working conditions are contrasted heavily by the lives of the bourgeoise who live off the backbreaking work of those down the pit. The Gregoires live a comfortable, placid life with full stomachs, warmth, the pleasure of knick knacks and leisure. The contrast is stark. At the time Etienne joins the pit workers, a recession is driving the price of coal down with the result that the pit owners want to cut costs. With a potential cut in wage coming to the already desperate and destitute miners, the conditions are ripe for revolt, which is exactly what happens with violent and unexpected consequences.

“With great difficulty Catherine made herself fill the tub, and she pushed it off. The gallery being too wide for her to get a purchase against the timbers on each side, her bare feet caught in the rails where they tried to get a hold and she moved along very slowly, with her arms held out stiff in front and her body bent double. When she reached the stretch along the corroi, the torture by fire began again, and sweat poured from her in great drops like heavy rain. Before she had gone a third of the relay she was streaming and blinded, and covered with black mud like the men. Her tight-fitting shirt seemed to be soaked in ink, and it clung to her skin and crept up to her haunches with the movement of her thighs; it tied her up so painfully that she had to stop work again.”

Meanwhile Etienne finds himself enamoured with Catherine, Maheu’s daughter. Catherine, however, takes up, accidentally it seems, with another worker Chaval. Chaval is violent, abusive, a situation which Catherine accepts as all she has ever seen is violent and abusive relationships. Catherine’s life is harsh, too harsh. Etienne, in his jealousy, takes up a political education. Etienne is already prone to violence himself, an idealist who is caught in the ideals of communism without the understanding of what it really means. With his mangled concepts he fashions himself as a political leader, leading his fellow miners into a destructive strike. Needless to say, things don’t work out well for anyone concerned.

“Yes, all you French workers have that one idea: you want to dig up a treasure and live on it for evermore in selfish and lazy isolation. You make a great song against the rich, but when fortune gives you some money you haven’t the guts to give it back to the poor. You will never deserve to be happy so long as you have personal possessions, and your hatred of the borgeouis simply comes from your mad desire to be borgeouis yourselves in their place!”

The violence and destitution, the miserable lives of the miners is exposed with pitiless clarity by Zola’s exceptional work. It reads as though it is a documentary, displaying the bare facts and the mistaken thinking of those on both sides, how this leads to inevitable conflict with disastrous results. Consequently Germinal is a stirring but harsh read. Nothing good comes of the strike, but the desperation of the workers’ lives, the sheer lack of hope, of a buffer zone in which the people could breathe, coupled with the wilful ignorance of the pit owners means the action is all but inevitable. Whilst Germinal was written 60 years ago it feels as fresh as though it was written yesterday, and it holds currency too. In some places in the world, workers are still exploited in this way, their lives are small, tight and miserable and perhaps here, in the West, our bellies grow fat on the back of those workers. Perhaps because they are now so far away, we do not see it. And here too the lives of those in poverty are merciless and tight and without hope. Revolution is not the answer, that it clear from Zola’s work, but empathy, compassion, seeing each other as people and not enemies, tools or animals, is perhaps our only hope.

Germinal is a difficult, sorrowful read. I found it hard to read it in long stretches. Fortunately the chapters are short so it is possible to encounter in small doses. But it is also an important book, an exceptional book, beautifully written. It is considered Zola’s most significant book and I can see why; I have read Therese Raquin previously and this, too, is a brilliant book but Germinal is next level. Zola is truly a great writer, though a pitiless one. Or perhaps not. Perhaps his unflinching approach is exactly what it takes to help us all see each other as human, living our different lives as best we can.

I'm an ordinary woman living an ordinary life in an ordinary place, and it is quietly wonderful
View all posts by bookbii →
This entry was posted in Classics, The Ideal Reader. Bookmark the permalink.

Reviewing the Top 100 of Everything

Primarily translated fiction and Australian poetry, with a dash of experimental & challenging writing thrown in

Where is your nonfiction section please.

Book Around the Corner

The Girl With the TBR Tattoo

Memoirs of a Chump

~for translated and literary fiction

Getting through life one book at a time

adventures in a mainly literary obsession

Reading the classics, CanLit, and everything else. In bed.

Books Can Save A Life

words, images and musings on life, literature and creative self expression